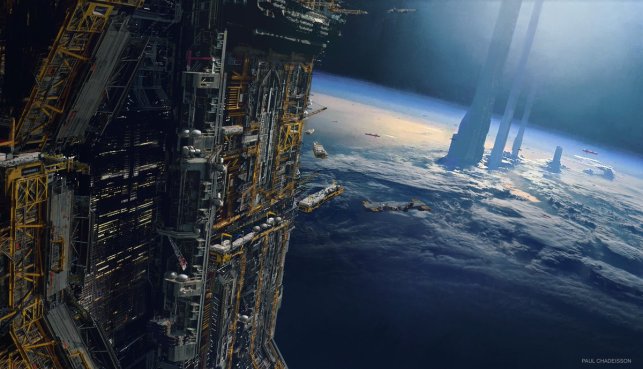 As a nice little rejoinder to the previous post, which in no small part dealt with Bataille’s energeticist diagram of the general and restricted economies, here is a bit from R. Buckminster Fuller’s 1981 book Critical Path on a somewhat related question:

All technical evolution has a fundamental behavior pattern. First there is scientific discovery of a generalized principle, which occurs as a subjective realization by an experimentally probing individual. Next comes objective employment of that principle in a special case invention. Next the invention is reduced to practice. This gives humanity an increased technical advantage over the physical environment. If successful as a tool of society, the invention is used in bigger, swifter, and everyday ways. For instance, it goes progressively from a little steel steamship to ever-bigger fleets of constantly swifter, higher-powered ocean giants.

There comes a time, however, when we discover other ways of doing the same task more economically—as, for instance, when we discover that a 200-ton transoceanic jet airplane—considered on an annual round-trip frequency basis—can outperform the passenger-carrying capability of the 85,000-ton Queen Mary.

All the technical curves rise in tonnage and volumetric size to reach a “giant” peak, after which progressive miniaturization sets in. After that, a new and more economical art takes over and then goes through the same cycle of doing progressively more with less, first by getting bigger and taking ad- vantage, for instance, of the fact that doubling the length of a ship increases its wetted surface fourfold but increases its payload volume eightfold. In- as much as the cost of driving progressively bigger ships through the water at a given speed increases in direct proportion to the increase in friction of the wetted surface, the eightfolding of payload volume gained with each fourfolding of wetted surface means twice as much profit for the same effort each time the ship’s length is doubled.

This principle of advantage gain through geometric size increase holds true for ships of both air and water. Eventually doubling of length of sea- going ships finally runs into trouble. For instance, an ocean liner made more than 1000 feet long would have to span between two giant waves and would have to be doubled in size to do so. If doubled in size once more, however, she could no longer be accommodated by the sizes of the great world canals, dry docks, or harbor depths.

At this point the miniaturization of doing more with less first ensues through substitution of an entirely new art—David’s slingshot over Goliath’s club operated from beyond reach of the giant.

This overall and inexorable trending to do more with less is known sum-totally as “progressive ephemeralization.” Ephemeralization trends toward an ultimate doing of everything with nothing at all, which is a trend of the omniweighable physical to be mastered by the omniweightless metaphysics of intellect. (Critical Path, 233-234)

“Ephermeralization trends toward an ultimate doing of everything with nothing at all”—in conceiving of long-range technical tendencies in such a way, Fuller finds a way to slip through the grasp of the double pincer that has characterized the dominant attitudes towards techno-scientific complexes in the period of late modernity. Two phrases sum up the sides of this pincer: bigger is bigger and small is beautiful. More ideological declaration than something derived from any truly rigorous exegesis, the first is the technocratic zeal at the spectacle of Galbrathian excess (a zeal that is, admittedly, close to this writer’s heart), while the second is the unbearable tweeness of the small and the local, the organicist circuit that lashes the metropolitan hipster to the back-to-the-land trad.

More with less, on the other hand, indexes a progressive involution that charts a simultaneous and interrelated falling number of of  inputs (and wasteful outputs) and increasing efficiency and output capacity. At the level of society development, it’s the raising of carrying capacity—the abstract ability for the earth system to sustain human flourishing—through more effective means that have fewer requirements on the front-end and less negative externalities around back (which is why Timothy Luke is able to argue, quite aptly, that Fuller is presenting an anti-Malthusian environmentalism that takes seriously “human inventiveness against all natural limits with regard to the planet’s cosmic energy, material, and information exchanges in their broadest ecological contexts”).

In John Smart’s strange and perhaps a tad bit woo-y hands, ephemeralization is marshaled under what he describes as STEM compression, the abbreviation drawing together space, time, energy, and matter/mass. For Smart, STEM compression is transcendental structure of universal evolution (that is, the evolution of the universe itself and the things within it); through it the spatial demands that a given system makes fold inward, time horizons rapidly implode to a singularity point, energy rate densities skyrocket (illuminating rising systemic complexity) and the efficiency of matter climbs while the physical density decreases (passing from biological to post-biological, technological substrates). Smart anticipates that the imminent—relatively speaking—horizon flips the Kardashev methodological system on its head by making the “increasing approach to black hole level densities”, not total energy usage, as the measure of civilizational development.

Francis Heylighen, meanwhile, sees in ephemeralization the form of a negentropic mechanism in action:

The net result of the drive towards increasing efficiency is that matter, energy and information are processed and transported ever more easily throughout the social system. This can be seen as a reduction of friction. Normally, objects are difficult to move because friction creates a force opposing the movement, which dissipates energy, and thereby slows down movement, until standstill. Noise plays a similar role in information transmission: over imperfect lines, parts of the signal get lost on the way, until the message becomes uninterpretable.

Physically, friction can be seen as the force responsible for the dissipation of energy and the concomitant increase of entropy (disorder), as implied by the second law of thermodynamics. Entropy increase entails the loss of information, structure, and “free” energy, that is, energy available for performing further work. This energy must be replenished from outside sources, and therefore a system performing work requires a constant input of energy carrying resources. However, the second law only specifies that entropy must increase (or remain constant), but not how much entropy is actually produced. Different processes or systems will produce entropy to varying degrees. Ephemeralization can be seen most abstractly as a reduction of entropy production, meaning that inputs are processed with less dissipation of resources. The result is that, for a given input, a system’s output will contain more usable energy and information, and less noise or waste.